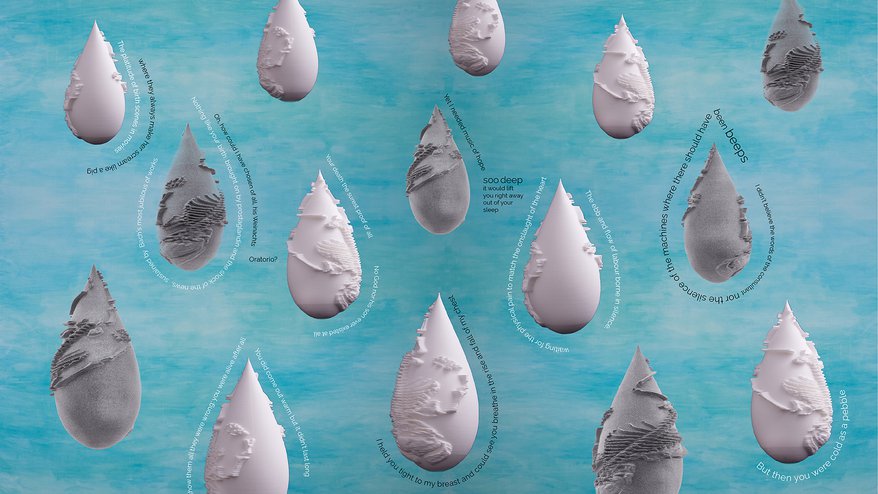 After so many cancellations due to Covid-19 it is nice to see the Manchester show has actually gone ahead this month. We did have to scale down the exhibition and relocate it to the waiting room of the Rainbow Clinic, where women can go for extra scans and support in a pregnancy following a stillbirth, but at least it’s being seen now in the real now for over a month.

I made the selection to show three digital prints, and two accompanying poems.

The first of the artworks is a collage entitled Y our Birth. It was made in 2017 and combines images of 3D rapid protoyped tears that have my late daughter Elvira’s skeleton embossed on them with a painting of the sky and words that make up a poem. The poem weaves around the tears describing the process of giving birth when already having been told your baby is dead.

The second artwork Elements of Human Life incorporates Neil Shubin’s (2013) formula for a human body, as broken down in the elements it consists of. When you have spent nine months being pregnant but deliver a dead baby, it’s impossible to make sense of the ‘Why’ question. Your body spent nine months making a life, a life you had hopes and dreams for, but without the life that sustains it we are left with no more than a bunch of elements. However, the only other time some of these elements are formed are when stars die and supernovas occur. This work does not explain the ‘why’ question but honours the amazing set of events that occur when life is formed.

The third artwork shown is a high quality reproduction of the Each Egg a World painting. The original is so large it wouldn’t have fitted into the waiting room.

Each hole in this artwork signifies a stillbirth, and all that that entails. This includes the pregnancy that went before it, the hopes and expectations of the mother and wider family for the child about to be born, the birth of a dead baby, the collapsing hopes, the years of depression that follow, the alienation from things worldly and eventually after years of hard work finding some way to live on that honours all that is good, even if the knowledge that all that is loved can be taken away at a moment’s notice remains engraved in ones being. The aim of this work is to humanize figures on stillbirth. When people read there are 2.6 million stillbirths a year, they don't realize the enormity of the grief caused worldwide, as they first have to imagine what it means for one person, and they struggle to imagine that.

The poem in response to this artwork written by Karen McCarthy Woolf is displayed near the artwork.

The online version of Each Egg a World is also presented on a slightly curved monitor screen. People can name one of the dots after their stillborn baby and write a short statement on their experience of stillbirth whilst they wait for their appointment at the Rainbow Clinic. Sofar 170 people have participated in this online artwork, either by naming a dot and writing a statement or by giving feedback on the artwork. You can visit the online artwork here.

Please give us your feedback on what you have learned from the artwork here.

To mark the opening of the Manchester exhibition on the 10th of September, I gave a free online drawing workshop on Zoom for parents from the Still Parents group brought together by the Whitworth Art Gallery. The workshop started with a presentation of artworks on the theme of baby loss. As this is still a subject matter that suffers from a deep taboo, most of the artworks show were my own, but there were artworks by other artists as well. We had about twenty participants to the workshop. People had been asked to bring a picture or object that reminded them of their baby and after a short drawing demonstration showing how to measure proportions with a pencil and focus on light and dark areas using a soft pencil and a putty rubber, people set to draw from their pictures or objects. The results were shared with the group at the end and everybody received some feedback.

We’re now in the process of preparing for the London show. More on the tour and workshops can be found here: https://www.stillbornproject.org.uk/events/. 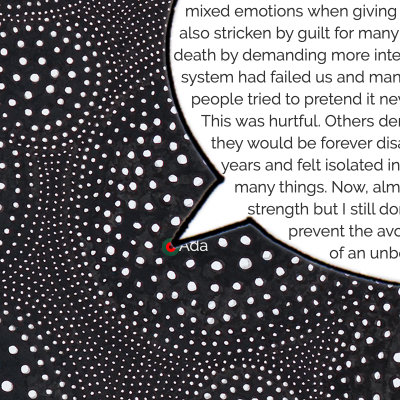